“Earl’s” is typical of small fueling facilities located throughout the country.  This one is available in all scales, from “N” thru “O”.  Although the building footprint is reproduced below remember that the building is only a small part of the kit.  From the included tanks, fencing & billboard the scene can be “shaped” to fit anywhere on your layout.  This kit is especially good for filling in areas that are difficult to scenic… like the areas between and next to turnouts.  Vehicle (as usual) not included.

In true Bar Mills styles the N-Scale version of the kit (on the left) is as detailed as the “S” scale version on the right. 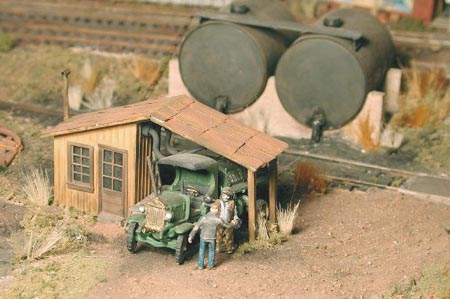 The original model the kit was based on resides on the layout of Earl Smallshaw… hence the name of the kit… “Earl’s Oil” !